Social media influencer, Edward Asare has shared a picture of a Ghanaian man selling roasted maize by the roadside.

But the way the corn seller was dressed quickly caught the attention of netizens. He was elegantly dressed. 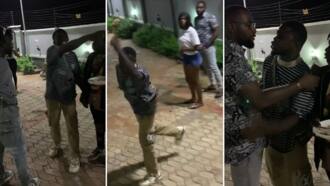 Jollof wahala: Man who sprayed celebrant with money at party goes mad after being deprived of rice

He also wore a tie, looking like someone ready for the office, but his own office was where he sold his corn.

“Everyone in Accra has seen this man before. Buy him when you see him. There is dignity in work. Location: Accra Mall Spanna Junction.”

“It depends on its location. I don’t think I’ve seen it before. Please add its location as we might pass by. Thanks.”

“He’s my friend. I drive most of the time to shop and chat with him sometimes.”

“I always see him in that tie (I call it the Ghana tie) at the Spanner bus stop whenever I’m on my way to Medina. He loves his job and I can tell he will do exception if he has a better opportunity elsewhere regardless of his educational background.

I got a degree in statistics but now I sell fried meat, I carry loads for a living – Man reveals on video

In a related story previously reported by Legit.nga keke driver has drawn huge attention on social media due to the different way he dresses for work.

Pilot Segun Ogundare aka Corporate Keke is popular on social media after being first featured on Legit.ng.

The man goes to work dressed in bright suits. His keke is also somewhat different from the others as it is personalized. He sometimes also serves as a motivational speaker online and in his Keke too.