An Oregon mother is fighting a new state law calling for free tampons in all boys’ school bathrooms – saying the money could be better spent on textbooks and supplies.

Eagle Point School District member Cherylene Stritenberg has called on the Oregon Department of Education to repeal the Menstrual Dignity Act – alone triggering a two-week comment period on the law ahead of its coming into force for the next school year, Oregon Live reports.

The law requires public schools, community colleges and universities to provide free menstrual products in all bathrooms, including those for boys as young as kindergarten.

It aims to include transgender and non-binary children, but Stritenberg says the money could be much better spent.

Cherylene Stritenberg has called on the Oregon Department of Education to repeal the Menstrual Dignity Act, which requires school districts to provide dispensers for tampons and menstrual pads in all bathrooms, including those intended boys from kindergarten age.

Stritenberg, who previously called on the state to lift its COVID vaccine requirement for teachers and volunteers, however, says the law creates an additional expense in a state that struggles to graduate for more than 80% of his high school students.

In fact, the Oregon Legislative Revenue Office estimated last year that the state would take about $5.6 million from the State School Fund in the first two years, which is enough to pay about 30 school salaries. teachers each year.

‘Don’t get me wrong, I’m not against making these products available, but demanding that we divert funds from our public school funds to ensure they’re specifically included in boys’ bathrooms is a misuse of those funds,’ Stritenberg said, suggesting the money be used instead for new textbooks and supplies.

“Hopefully we can reevaluate and find a better solution that is fiscally responsible and beneficial to those in need,” she added. 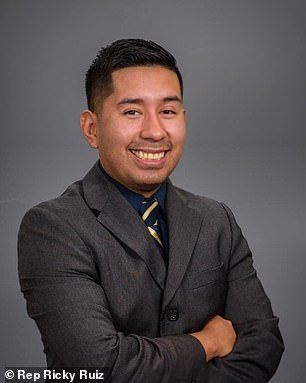 This is widely supported – although advocates say providing the products in the boys’ bathroom is a wake-up call and a needless waste of money.

The original version of the bill only required schools to provide gender-neutral and girl-friendly bathroom products, and as the program rolled out last year, districts were required to provide tampons and pads. free in “at least two bathrooms”, but had discretion to choose which ones.

The law was later expanded to include all bathrooms intended for boys, so that transgender and non-binary students could have access to these products.

“As we know, a lot of our young people don’t identify as female or male, or are in gender transition,” Ruiz said. “We wanted to respect that and make sure we provide those resources in all toilets for people who might have trouble switching to a different toilet.”

It is now the costliest menstrual product bill on the West Coast, according to Oregon Live.

In California, high costs forced lawmakers to trim their 2021 law to only include toilets in grades six through twelfth schools, including at least one boys’ bathroom per school.

Community colleges and state universities are also required to have at least one on-campus location where students can access these products.

And in Washington state, public and private schools are required to provide menstrual products in all gender-neutral and female bathrooms for students in grades six through 12.

If a school does not have gender-neutral toilets, it is required to put menstrual hygiene products in at least one male bathroom.

The law also requires that students in grades three through five have access to these products in at least one location.

But Oregon’s law goes further and requires tampons and pads in boys’ bathrooms for children as young as kindergarten – which Stritenberg says is a waste of resources, and fears that students do not misuse the products and damage the facilities. 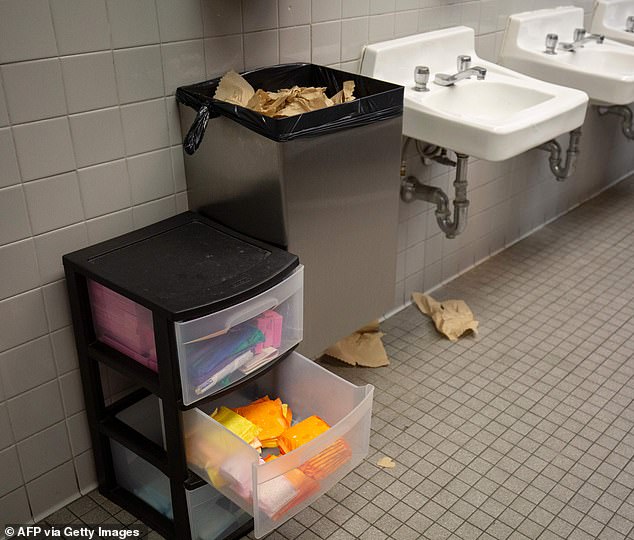 Already, Oregon Live reports, the Beaverton School District, Portland Public Schools and David Douglas School District have spent hundreds of thousands of dollars on new dispensers for all bathrooms, though officials from the State are expected to reimburse school districts for fees.

Portland spent about $200,000 on products and dispensers, including larger units for gender-neutral and girls’ bathrooms, and smaller units for boys’ bathrooms.

Now Stritenberg is trying to stop the movement, asking the state to allow a public response before the law takes effect.

The Department of Education has 90 days to respond to the petition.

If state officials roll back the rule, districts could continue to provide the products in boys’ restrooms, and in Beaverton School District, facilities manager Josh Gamez said the district would want to hear from his community. before making a decision.

“If the product is used, we want to support it,” he said. “It’s for the students.”

Daphne Ischer, who graduated from high school this spring, said she wants the broader law to stay in place.

She previously said it was important for transgender and non-gendered students to feel accepted.

Ischer added that she views the distributors’ universal presence as an opportunity to begin teaching young students about menstruation and menstrual hygiene.

Ruiz also said he is confident the bill will remain intact, although he said he would be prepared to make changes if necessary.